Passing, receiving and dribbling are, perhaps, the most fundamental skills in our beloved sport. If you teach a kid the basic of each of these skills, that young player will certainly be able to play a match. However, he or she might not do it in a very advanced way, at least the player will be able to participate in a hockey game. By the way, if you like, you can also play online roulette game, we surely do that from time to time when we are not coaching.

Sometimes coaches forget about the development of these basic skills in later stages of the players, especially when the players become adults. We believe that these techniques need further development, through the entire playing lifespan.

Ric Charlesworth, Australian hockey legendary coach, said that he wanted to have teams that could do the most basic skills of hockey at a speed, accuracy and pace faster than the opponents. If you have the chance to watch some of the Kookaburra’s matches of the FIH 2014 World Cup held in The Hague, you will be able to identify these technical patterns easily. 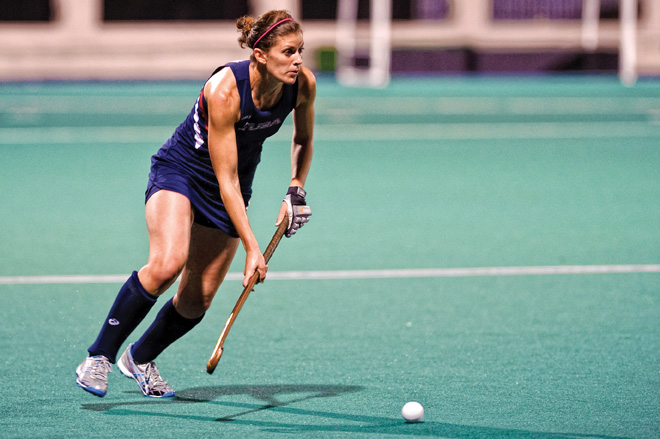 We would like to show you two different plays with the same pattern (Video credit to Muni Hockey TV), but with a different outcome. In the first one you will see the left back receiving the ball with full control, looking up and releasing an accurate pass. Please have a look at it:

In the second clip we can watch the same play but the result is quite different: the left defender is not able to stop the ball and gain control, therefore a turnover is generated. Pay attention to it:

The questions in hand could be: what happened here? Why she was able to successfully control the ball in the first play, but had trouble with the second one? How could we help this player to improve her receiving skills by watching the video?

If you pay close attention to her footwork, you will see minor details between one clip and the other one, and we believe that this is where the problem occurs. In the first one her feet are well planted, her body weight is in total balance and her technique has no flaws.

On the second one we might say that her feet were moving on the spot, this threw off her balance creating the failure in the ball trapping action. Luckily, this situation didn’t generate further danger against her goal and her team (Club San Fernando) was able to become Under-16 Champion in Buenos Aires, Argentina.

If we introduce drills like the following one during practice times, we can help our players to improve their receiving skills and we will have a more accurate, safe and secure team. Introducing these exercises as part of the warm-ups could also be a way to make full use of the time during our training sessions, promoting an ambience of concentration, intensity and dynamism from the first couple of minutes during each practice session.

We hope you have enjoyed this analysis and training ideas. Make sure to give it a try with your team and see what the outcome is like. We believe that you will see positive changes in a very short time.