The stakes were high at the game, with the LU team, who had finished among the top four alongside Kurukshetra University, having lost in their previous two matches on Sunday. The 70-minute contest, which the hosts eventually won 2-1, was hardly a clean game; verbal duels and pushing were routine and the visiting side were shown two yellow cards, whereas LU got a green card. 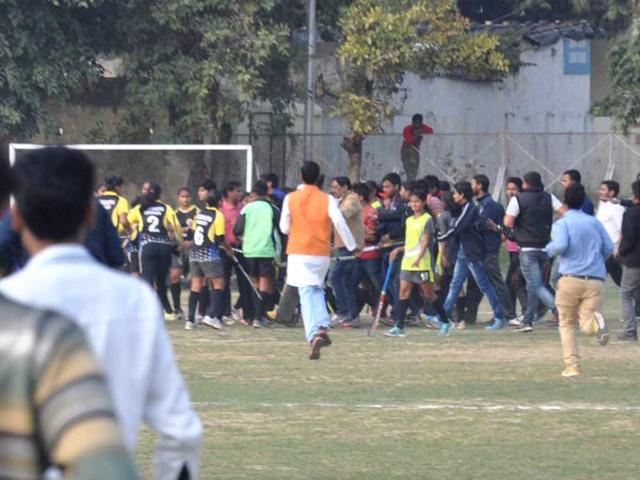 What followed, however, was far worse. According to eyewitnesses HT spoke to, the players of the losing team, Kurukshetra University, heckled umpires Sumit Pal and Rishi Kumar for their ‘biased officiating’ as they were leaving the ground. A few team members allegedly used their hockey sticks to push the two officials.

Bharti Sharma, the captain of the Kurukshetra team, however, refutes the allegation. “It’s baseless that we abused the umpires or pushed them with sticks. We just told them about their biased umpiring and before we could move out of the ground, the LU girls and some male officials tried to push us,” Sharma told HT.

“Both the umpires were biased and never wanted us to win. Throughout the match, we were abused by the LU players and their supporters, but no one from the organisers or officials uttered a word against this,” she said. Kurukshetra coach, LK Saini, seconded her. “My girls didn’t abuse or slap anyone,” he said.

Umpire Sumit Pal, however, said the officiating was fair and they only penalised what they perceived as rough play by the visiting team during the match. “It’s baseless that we were biased or were trying to help LU win.” Lucknow University Athletics Association’s chief, Pawan Agarwal, while condemning the incident, defended the umpires. “The umpires did no wrong, they were honest. The Kurukshetra girls were in an aggressive mood and played a rough game from the beginning.”

He said that the organising committee had issued a notice to the Kurukshetra officials, who have promised to respond on the matter soon.“So far we haven’t written to the All India University Athletics Association about the incident. Let their (Kurukshetra University’s) reply come, only then we will send our report to the national body,” said Agarwal.