We have already left behind the qualifying rounds of the Olympic hockey tournament and we have seen, in general terms, many cards shown by referees. This is because the idea of the FIH is to avoid the players’ complains and to find umpires being surrounded by them. We have also seen that the fouls  have been sanctioned very quickly with cards. This is surprising because in previous tournaments the behaviour of the referees was not the same.

In the first matches of the quarterfinals, we saw that the umpires have changed their attitude yet again. During Argentina-Spain there was at least 4 fouls during the 1st period, that during the Round Robin would have been punished with cards. However, we only heard strong whistles and warnings. Following the same direction, and from my personal point of view, this helped a lot because it made the players stop using the tactical foul as a defensive system, which began to be seen as the only way to stop the opponent’s attacks. I wonder: why is it possible to have this attitude during the knockout stage but not during the qualifying round? Having 2 players less for 2 minutes is far ahead at this level and although there are different feelings and ways of seeing, my opinion is that the second option is always the best.

Another important issue is the use of videoref as it is no secret that the players learned to use this resource and take advantage of it in a much better way than the umpires. It is as if the umpires rely too much in the videoref and look more relaxed. I mean, it is not fine that the umpires lose most of the reviews performed during a match. This only generates in the player, a sense of insecurity and less trust on the referee. This forces them to question the big plays with the risk of losing the right of the review.

We have seen another example in the game between India and Argentina: there was a situation where the ball enters the goal and crosses the line but the video umpire says he doesn’t have enough reason to change the call. The images that you see on TV are the same that are seen by the video umpire on the monitor, then one would assume that the pressure and the responsibility of the person in this role is often greater than the field umpires. Despite of this, I have seen an outstanding level of umpiring in games such as the one between Germany and New Zealand, where the referees have done a great job.  This match decided in the last 3 seconds of the game and the umpires were able to understand the game, the players, the situation and were always prepared for anything until the last second of the game.

To sum up, it is very evident when an umpire is good at his job and when they misread the situations or when they do not understand the players from a communication point of view. Today, not being able to do this, is not acceptable at any level as officials must learn how to communicate with players and partners. Knowing the rules is not enough to be a good umpire, you need those “soft or unwritten skills”. 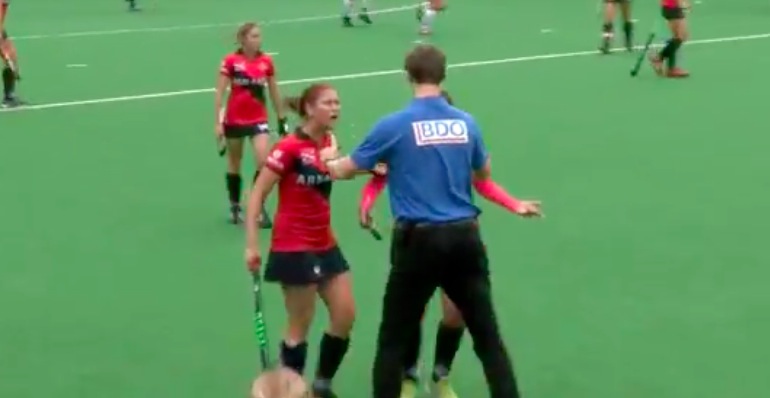 A perfect attack for Wellington (BEL), but was the ball off bounds? 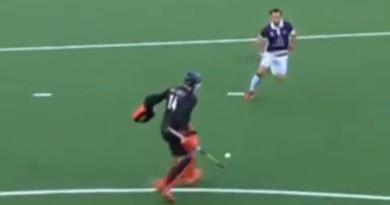 What happened with this goalkeeper that kicked the ball while being outside of the circle? 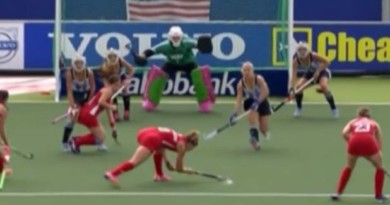 Offensive obstruction on the penalty corner while doing a deflection?