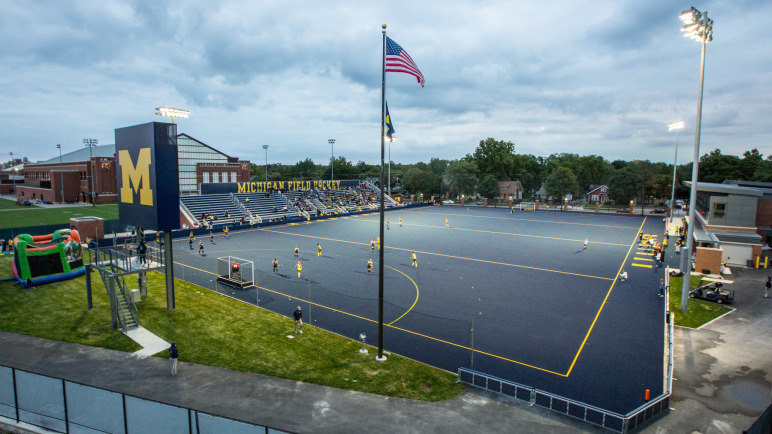 Michigan Field Hockey Wolverines is a college hockey team that plays in Division I in the United States. The facility where they play is one of the best stadiums in the world. This stadium, which was renewed in 2014, has a capacity of 1500 seated fans and had a total cost of 13.5 million dollars.

The facility includes the amazing staff offices with a view of the field, a medical area, a spa and a state-of-the-art locker room and team meeting room.

Since 1973 field hockey has been a competitive sport at the University of Michigan and is part of the Big Ten Conference. The field hockey program at this university won several championships in between the 1990s and 200s, winning a conference regular title in 1997 and the conference tournament in 1999. In 2001 the Wolverines became national champions for the first time under the coaching of Marcia Pankratz.
Michigan has participated in more than 11 NCAA tournaments where they reached the Final Fours stage in 3 occasions, and when in 2001 they won the National Championship, they became the first female team in the university to do so. They defeated Maryland by 2 – 0.

In addition the hockey pitch of Michigan Field Hockey, features the navy blue and gold colors, which are the university colors.

The home stadium is called the Phyllis Ocker Field Hockey Field and it was built in 1995. By the end of 2013, the Ocker Field was renewed and the turf was replaced. Ocker Field is named in honour of a former teacher, coach and administrator called Phyllis Ocker, who was the coach of the hockey program in 1977 and 1979 and was the director of the women’s athletics program from 1977 until 1990.

To learn more about the Michigan Field Hockey program, you can visit Mgoblue.com